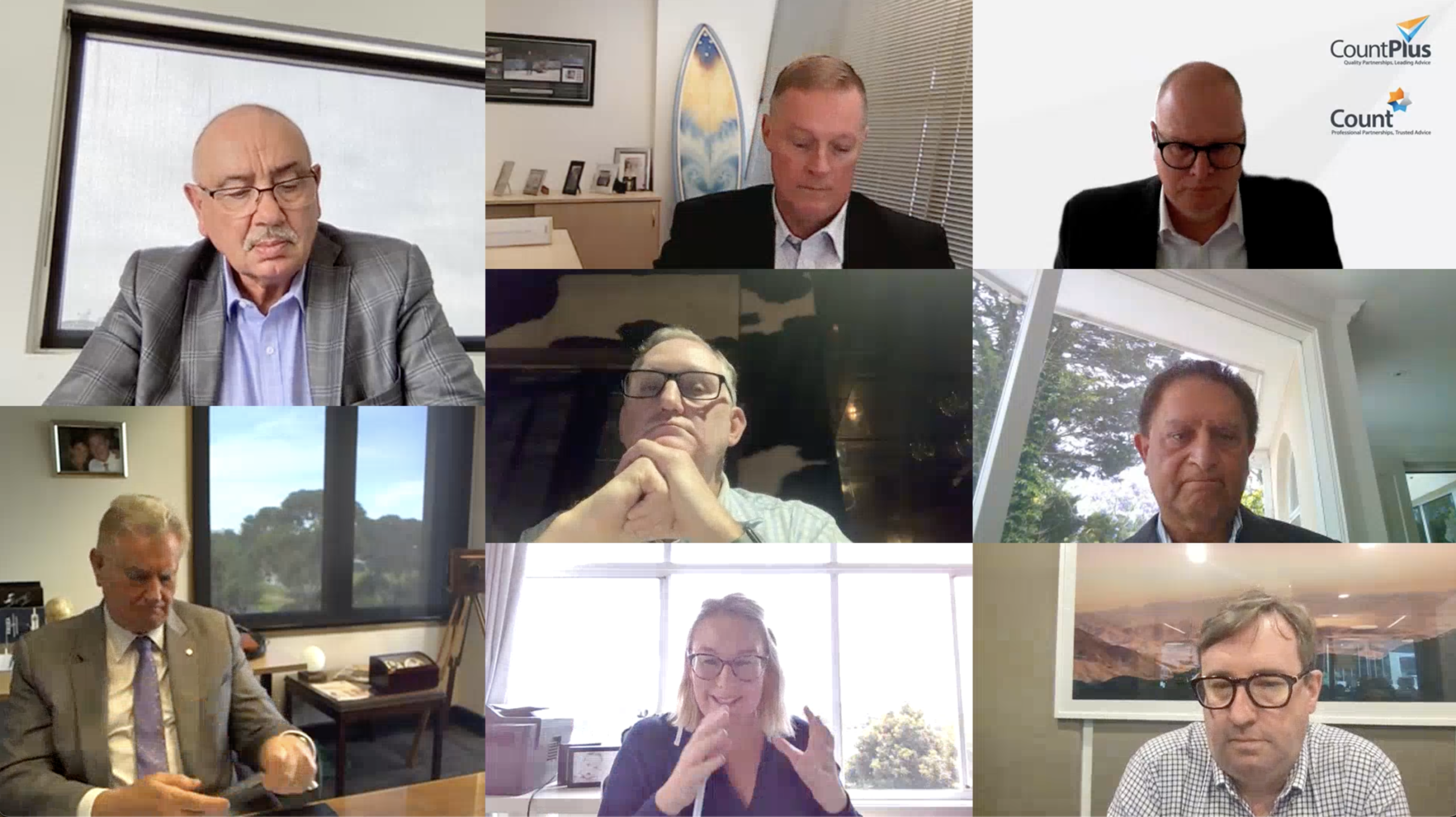 There is only one way. Consolidation will take place. Further consolidation. The economics will drive that so forget about regulatory forces the market is always a more powerful force.

I absolutely get where Don Trapnell was coming from in terms of the banks being good as breeding grounds for advisers, training them up and letting them move on to other firms.

I might be a bit controversial in saying this but I think there’ll be some large vertically-integrated players made up of AMP and IOOF, there’ll be Indy Singh’s [Fiducian) model and then five or six mid-tier players which need to have 300 to 400 advisers in them to be economic because it’s going to be a scale game now and then there’ll be this big tail of scale and micro-AFSLs where there’s one or two or 10 or 20 advisers which will have to build up some form of cooperative around scale, efficiency and pricing power. That is where I think we are going to tend up.

I can see that consolidation will be rife but the challenge for the licensee will be determining what the licensee is actually worth and in my experience they’re not always an asset, they’re a liability because you’ve got this tail you have to look at when you’re making an acquisition.

I think there will be more and more friendly mergers taking place and I think that the market will determine that consolidation is the only game in town now.

If I look at mergers my expectations pretty much align with exactly with what Matthew said. I expect that a handful of large AFSLs, maybe half a dozen mid-size and when I look at the economics it has to be 300 advisers and up.

I think we have a couple of years of opportunity ahead of us for those that want to grow but the competition is becoming more and more fierce every day and that then will lead to those who want to remain entering into some friendly form of merger.

Scale really is the name of the game. If you haven’t got scale you can’t reach critical mass on your expenses versus your revenue and 300 to 400 is probably a nice sweet spot.

We’re going to continue to see an exodus from the industry in the industry in December this year. We’ll see another exodus. We’ve done our numbers on how many are not going to take the journey past January and I’ve been surprised how few it was. A lot have taken hold of the branch held out by Jane Hume which said fail twice and you can try again in September and that has elongated the amount of time before they leave. So we’ll have another lot leave in September, near year.

And then its going to be January 2026 when the big exits occur because if you’re 60 years old and headed towards January 2026 are you going to devote four years of your life and your last five years in the industry towards doing a degree to get one year of practice? Of course you’re not unless you are intent on going on and on and on and no one goes on and on and on.

That is not a self-serving statement. It is just reality. To provide the compliance for a two-person or three-person practice it’s not hiding what you do its actually getting out there and doing physically what’s in your license and the cost is so prohibitive for a small practice.

It’s not going to take long before a couple  of the small self-licensed groups come under fire legally and they get sued by someone or they have an Australian Financial Complaints Authority (AFCA) complaint that goes against them and that’s going to send them bust because your PI doesn’t cover everything, as much as we wish it did.

A small licensee is not going to have the financial capability to counter such an attack on his balance sheet.

Once that happens, and it will be pretty public when it happens, we’re going to see this move towards self-licensing start to stem and we’re already seeing that people who have gone out to pursue self-licensing knocking on our door and saying the grass wasn’t that green at all. Can we come back.

There is going to be consolidation in the sector. There is no doubt about that. What is going to look like? We’re going to see the big getting bigger and the small filtering away and a smaller tail.

I agree with what everyone else has said. Don has hit it on the head.

In our business we have a practice development manager who undertakes quality assurance for something like 15 to 16 planners which is exceptionally expensive. I mean what do we have to earn to look after these two people who are looking after something like 16 planners.

The practice managers are the first line of defence, the quality assurance and compliance are the second and then you have to have face to face compliance and then you’ve got to have the audit which KPMG carries out on files as well. Plus you’ve got the overheads your business costs, your systems, your offices, your boards, your risk management. All that stuff adds up.

The costs are actually prohibitive.

I can see there has been a shift. We have been hearing a lot in the press that people are boasting about becoming self-licensed but I agree with Don that they’re going to come back because they’re going to struggle with their strategy development, their resources which are either unavailable or unaffordable.

I think there will be two sets – the small ones who realise it is not as simple as it can be and the larger ones – 300 to 400 – and then IOOF and AMP.

We’ve tried to work it differently. I don’t think we’ll get past 150 but the idea for us is not so much more and more people but to lift the volume of the business they can write so that if they can write a net $6 million to $7 million a year and build a good marketing arrangement with our marketing and have a good marketing plan and spread their wings out, get referral sources, get good clients that we can look after that could generate a $1 billion in inflows of new money with 150 people.

I agree with what’s been said. I particularly agree with Don around the smaller AFSLs but I’ve broken it up into two waves – there was that wave of everyone racing out to get one (an AFSL) as the Westpac/BT dislocation happened and a lot of people got self-licensed and now we’re hearing similar stories to what Don said with people coming back to have licensee conversations because they’ve either missed a sense of community because they don’t have that any more or they might have gone out and joined a BT world which was created but they weren’t like-minded peers.

The other thing that I am hearing is that with the amount of regulatory change that has come through they are losing significant time resourcing their business trying to make sense of it and their legal bills are going through the roof because they don’t have the experience to dissect what that means for their business and their clients and what they have to do next.

So, I feel like there’s that wave that have already been on the AFSL journey reconsidering whether they come back and there are others who are considering consolidating at this point and I think we are going to see a similar wave again where they are yet to learn that lesson.

That wave will come in another two or three years’ time and you’ll see another form of consolidation happening at that smaller AFSL level.

Scale game. Scale very important and will drive consolidation. The other thing is what clients are expecting. I think as client demands increase particularly around the delivery of information and practice efficiency the only way to deal with that is around scale and the use of technology as well.

Consolidation is happening and it is going to happen. It is about scale and businesses being big enough to have the infrastructure to deliver on the client demands which will just continue to accelerate over the years to come.

I have to disagree with some of what has been said.

There is one evolving model that is very like the public practice world of accounting which is a self-license with 20, 30, 40, 50 employed advisers because the profit in my experience is not at the licensee level, the profit is at the practice level.

So, I think there will be the rise of firms that share resources. That is how you make the most money in financial advice. Being a licensee is a very, very tough way to make a return on equity.

My own financial adviser is self-licensed and loves being self-licensed because you can outsource virtually every scale requirement that you need.

The industry funds got started by outsourcing scale to administrators and investment managers. Scale is outsourceable in the world of technology.

Self-licensed people, in my view, are most likely to come back because of peers.

But in my view, in 10 years’ time if we are a genuine profession there will be no licensees. In the accounting world, in the engineering world in the actuarial world, in the legal world there are firms but it is a professional body that says you are an adviser and admits them.

I think all the services licensees provide are crucial to a successful practice, but I don’t think you’ll be doing it under a license you’ll be providing services they’ll want to pay for and competing at the business level but without the concept of a license.